Four CAMSER members will be exhibiting at EMO 2021 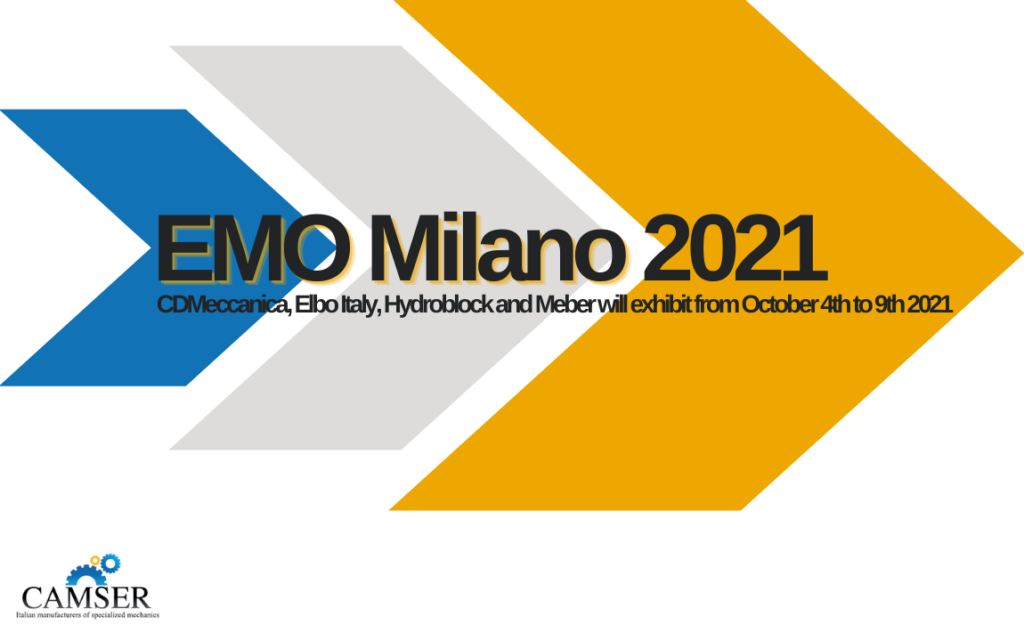 CDMeccanica, Elbo, Hydroblock and Meber will be exhibiting at EMO 2021!

The countdown has officially started: only 13 days to the beginning of EMO 2021, the leading trade show for the operators of manufacturing industry, promoted by CECIMO (the European Association of the Machine Tools Industry). This year, four Consortium members will take part in the event, which is considered the most relevant in representing the pretty nuanced world of metalworking.

In 2015, 155.000 visitors (of which approximatively 50% coming from foreign countries) paid a visit to 1.600 exhibitors, establishing the trade show as a key event for the sector; namely, 40% of the visitors might be retraced to sectors such as machine tools, automotive, aerospace industry, aeronautics, railway industry, medical and optical industries.

EMO Milano represents the chance to reduce the losses suffered by Italian SMEs due to the pandemics; currently, the data show significant industrial recovery, marked by an increase in the production levels by 5.3% to the pre-Covid production level. The statistics look even more promising if we consider that the data supplied by France and Germany underlines a certain struggle (respectively, -7.4% and -8% compared to 2019 production level).

Innovation and digitalization will be the keywords for EMO Milano 2021, as well as driving forces to the recovery of sectors as automotive and mechanics.

Speaking of which, CDMeccanica, Elbo Italy, Hydroblock, and Meber are ready as ever to present their renewed proposition.

CDMeccanica will be exhibiting its chuck jaws

With a ten-year experience in producing jaws, grinding machines, and t-nuts, CDMeccanica is highly specialized in the creation of chuck jaws, often custom-tailored. In fact, customized chuck jaws improve the machine’s productivity, assuring the maximum grade of efficiency for the machine and minimizing the time stops caused by the need to substitute the standardized workpiece. Hence, the zeroed maintenance costs and an actual improvement in the production yield. Moreover, customization makes it possible to choose the most appropriate metals, in consideration of the sector the components are aimed to (eg: metals specifically requested for any sterilized and sterile production). The result? After 10 years of activity, 8 customers out of 10 keep on choosing CDMeccanica as a business partner.

Elbo Italy is ready to present to EMO visitors its brand-new product, the Genius 4X position sensor. Highly qualified in producing encoders, optical and position sensors, and digital readout systems, Elbo created a new tool to automatize the machine tool in an easy and finance-wise way, avoiding the installation of any workstation. Particularly, with its new multi-axis position sensor, Elbo can activate canned cycles, M codes, and specifics operating parameters (such as speed and spindle); moreover, three different operating procedures are available: automatic, semi-automatic, and hand-held. Elbo’s new position sensor is an electronic tailor-made solution, capable to satisfy any request by the customer in an approachable and simple way. Official supplier of all the measurement tools for the machines used by the University of Bologna, Elbo Italy is a go-to for any solution which leads to saving instead replace a machine.

Speaking of a prestigious partnership, Hydroblock knows something about it; in fact, its swing clamp cylinders are worldwide recognized as the best solution by the automotive market leaders. Hydroblock’s SR – Compensation Systems, the authentic company’s flagship, provide larger clamping areas – up to 30 -40% more, compared with those supplied by their competitors. This peculiarity guarantees a superior clamping force and to operate at lower pressure, sparing the costs represented by bulky cylinders and their installation. Moreover, their use leads to the suppression of pressure multipliers and related costs. With several international patents filed in numerous countries, Hydroblock will exhibit to EMO Milano 2021 its new brand product, the HPC – Hard Prismatic Clamp, a prismatic clamping arm guide system, to be used in combination with the unique compensation system all cylinders of the SR – COMPENSATION SYSTEM series are equipped with. The HPC neutralizes the most recurring issue when it comes to cylinders: in fact, the force transmitted to the clamping arm is the main cause of eventual distortions and vibrations of the workpiece. Using the HPC, complementary to any cylinder of the SR Compensation System series, puts the end-user in the condition to aspire to better quality, with a tolerance margin close to zero.

Meber and its new machine for cutting sandwich panels

Meber comes full circle, with an experience of sixty years in producing sawing machines to process the cutting of materials as wood, aluminum, steel, plastics, and cast iron. The brand is internationally celebrated as one of the most prominent in performing the cutting of wood; at EMO Milano 2021, Meber will set out its new tool, a machine created for the construction industry. In fact, the new Meber’s sawing machine is for cutting the sandwich panels, a frequently used component in the construction sector, made of a layer of polyurethane and two metal sheets. A common sawing machine employs an average time of 30 seconds to perform the cut of a sandwich panel; Meber’s new machine takes just 6 seconds, granting the operator to optimize the production process, using barely a sixth of the time with the same quality of service.